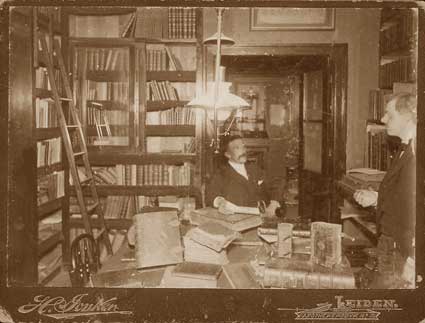 Our firm is part of a long-standing tradition of printing and trading books in the city of Leiden. Already in the 15th century, Leiden knew several printing houses, but their amount and importance considerably expanded after the foundation of Leiden University in 1575 and after the fall of Antwerp in 1585. The famous Antwerp printer Christoffel Plantin opened a branch, followed by Frans van Raphelingen and Louis Elzevier.
The Leiden University Library was of course an important collector of books, but private persons also started to form libraries. In many cases these collections had to be dispersed after the death of their owners. This was mostly done by booksellers who set up an auction. Initially these auctions were held without printed catalogues, but in 1599 the first printed catalogue ever was published in Leiden on the occasion of the sale of the library of Sir Philips Marnix van Sint Aldegonde.
In the following centuries the firms of a.o. Jordaan Luchtmans, Jacobus Hazenberg, Albertus Willem Sijthoff and Evert Jan Brill kept the book trade in Leiden thriving. This last firm marks the connection with our firm, which was founded as an offspring of this still renowned publishing house.

The historical connection b

etween the location of our firm and the book business dates back to the 14th century. At this exact location lived the famous jurist and book collector Philips van Leyden (ca. 1328-1382), the most important official of count Willem V of Holland. Because of its library his residence was called 'Templum Salomonis', referring to the proverbial wisdom of the Old Testament King Salomon.

Until the middle of the 17th century this connection was maintained, as can be gathered from the printer's device of Christoffel Guyot who had his business here: 'In Salomons Tempel'. In the 18th century the location served several other purposes, but, for the building history, it was a defining period. When master carpenter Andries Warendorp obtained the two houses on the corner of Nieuwsteeg (1 and 1a) in 1765, he combined them behind the single façade that can still be admired today. In the 19th century the building changed ownership several times, until it was sold to P.J. Burgersdijk in 1894.

Due to the flourishing business on the field of printing and publishing the firm Brill found it expedient to dispose of its auction activities and part of the antiquarian stock. Pieter Johannes Burgersdijk (1867-1915) and George David Niermans (1854-1920), former Brill employees, offered to take over these branches. They established their business on Nieuwsteeg 1 and appropriately restored the traditional name of the property, 'Templum Salomonis'.
Although no official division of tasks was laid down between the two men, it appears that Burgersdijk mainly took care of the auctions, whereas Niermans devoted most of his time to the antiquarian bookshop. After their death they were succeeded by Mrs. Burgersdijk-Elshout and Mr. Dee, who was employed by the firm since 1901. On his turn Mr. Dee introduced Mr. J.P. Stam into the book business so that he could take the place of Mrs. Burgersdijk-Elshout in 1940. After the war the firm was led by Mr. Stam and his wife, Mrs. Stam-Hommes, who inherited the business in 1969. Urged by illness she had to withdraw from the business more and more and finally decided to sell the firm. The current owners Arno de Bruin and Arne Steenkamp, who, since 1981, had run the antiquarian bookshop Blaeu in near-by Salomonsteeg, took over the business from Mrs. Stam-Hommes in 1986.

es issued by Burgersdijk & Niermans regarded an average of 3000 lots. Apart from books they also offered a category 'varia', objects to be found in libraries and studies, such as statues, bookcases or globes. The catalogues were written in French and did not mention estimate prices, as is common nowadays, but the new prices of the books. One of the high points in the history of the firm was the auction held in 1932 of the collection of the 'Leesmuseum' (Reading Museum) in Amsterdam. Other important auctions in the early years of the firm regard the botanical library of C.A.J.A. Oudemans in 1907 and the historical collection of P.J Blok in 1930.

For several years, auctioning in combination with the internet has become indispensable, and - although this has drastically changed the world of the auction industry - we at Burgersdijk & Niermans believe that we have succeeded in combining tradition and new time.

The sale of antiquarian books was of course largely executed through catalogues. Already in 1896 Burgersdijk & Niermans issued their first catalogue on classical philology, Neo-Latin and archaeology.
In 1926 the firm also started with the sale of new books on the field of Literature, History and Theology. For this purpose the building was partly rearranged. In the years to follow Burgersdijk & Niermans also opened a branch in Leiden, Breestraat. When, during the war, Leiden University was closed down, the firm followed the students to Amsterdam where they opened two branches successively in Langebrugsteeg and Leidsestraat. On this last spot they also located an auction house, which was transferred to Herengracht in 1944. From 1947 onwards the activities of Burgersdijk & Niermans were clustered again in Nieuwsteeg in Leiden.

When the company became the property of the current owners in 1986, besides the restoration of the building, the renovation of the book business was also energetically taken up. For example, catalogues in the field of classical languages were regularly published under the title 'Books on Classical Studies'. These quarterly 'newsletters' contained newly published books and antiquarian titles; a very seductive mix for those interested in this field at home and abroad. Soon the first steps were taken on the path of automation and systems were developed - in-house - for stock management and auction descriptions.